I went to the Plastic Modelling and Wargaming Show organised by the IPMS Avon Group with the Lincombe Barn Wargames Society (of Alien Squad Leader fame) at the Thornbury Leisure Centre on Sunday. It has been run for a few years now but this was the first time I had had the chance to visit.

It was huge, with two of the sports halls and the indoor bowls green all packed with a combination IPMS display stands put on by the many modelling clubs in the region (and from further afield) as well as around a dozen wargames put on by various groups.  There was a large number of traders mainly of modelling supplies but with a leavening of wargames traders, in particular Great Escape Games (who nearly persuaded me to by the latest version of Death on a Dark Continent), the Dice Bag Lady  (aka Bad Squidoo Games) and Helion the military publishers (from whom I bought their Spanish Armada paper ships book). 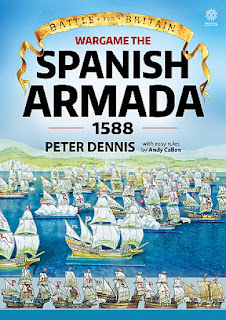 Overall I think I was a little non-plussed by the event.  Secondhand plastic kits are clearly a big thing, judging by the vast numbers of over-stuffed and rather tatty cardboard boxes that adorned many of the stalls.  The models on show were of an excellent quality (and fully justified the many signs advising "do not touch"!) but there didn't seem much opportunity for interactivity - there didn't seem to be many demonstrations, for example, and the competition displays seemed tucked away and unadvertised.  The wargames provided some much needed movement to the proceedings (plastic models are rather static) but even here the gamers seemed rather absorbed by the games, which is fine if they had been able to provide some sort of printed explanation as to what was going on.

I am probably judging the event a little unfairly.  I got to it rather late in the day when the energy was starting to drain away and I am also comparing it with the Bristol Model Railway Exhibition that takes place at the same venue which benefits from having more action on the rail exhibits and probably more money to invest in the hobby  both through the paying public and the supporting traders.  It has also been run for nearly 50 years.  I will probably go again some time in the future but I am more likely to go to the Lincombe Barn wargames show Reveille II at the end of November.
Posted by Fitzhorn at 00:03