I played my third game of Memoir 44 for the Six-by-Six Challenge, this one being a simulation of the assault by the US Rangers on the cliff top positions at Pointe-du-Hoc.  The deployment map below shows the cliffs overlooking the beach up which the elite Rangers would attack the various German emplacements and positions. 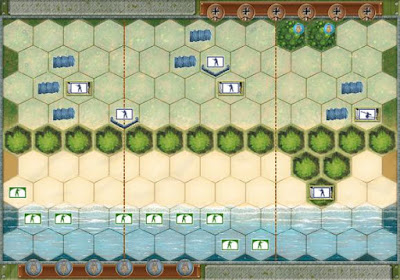 In this one either side had to gain 4 medals for victory, for which the Allies had the additional opportunities of capturing the wood hexes at the top of the board.

I played this one solo (both my possible opponents were at work while ironically I was on holiday - you can tell they are getting older and now both have university studies to fund) and therefore for once I could not lose.  As with the previous games this did seem to be all about playing against the cards.  The Allies had a whole series of right flank cards when everything they had was on the left or in the centre.  Eventually this told when for a turn or two the Allies could do little but exchange cards while the Germans were able to rush up to them and shoot them to pieces, although even here the German battle dice were remarkably poor.  In the end it was a clear German victory although it had hung in the balance for a few turns.

I remain to be convinced by Memoir 44.  It may be quick and have a sumptuous looking board but there seems to be little opportunity to come up with a strategy for each scenario that cannot fall foul of the capriciousness of the cards.  I get the fact that the gamer should not have "god-like powers" of control but there really ought to be a bit more reward for more carefully thought out play.  I think I will play out my 6 games and then think seriously about returning Memoir 44 to eBay.
Posted by Fitzhorn at 19:16